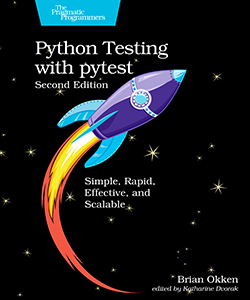 Why a Second Edition?#

This section is an excerpt from the Preface, which is available to read as a larger excerpt on the books Pragmatic page.

Both Python and pytest have changed since the first edition of this book was published in 2017. There have been updates to pytest that are now reflected in the book, such as:

There have also been updates to Python that are reflected in the book:

Also, since publication of the first edition, I have taught many, many people about pytest, and I think I’ve learned how to be a better teacher. The second edition not only expands on what is covered in the first edition—it grew from 7 to 17 chapters!—but also it presents the material in what I think is a more gradual, digestible manner.

So what’s in all of these new chapters?

I moved coverage of command-line flags and configuration settings in general to their own chapter at the end of the book where, after you’ve learned the basics of pytest, you can check out the ton of cool options that can help you run your tests more efficiently and effectively.

Also, I consolidated the information about debugging test failures into a chapter of its own. In the last edition, this information was spread all throughout the book. It is my hope that when you are faced with a deadline and a failing test suite, bringing this information together into one chapter will help you figure an answer out quickly and ease some stress.

Finally, the example project changed. The first edition used a project called Tasks to illustrate how to use pytest. Now it’s called Cards. Here’s why:

The code examples have also been simplified. The directory structure of the first edition code examples followed a progression of a possible test directory within a project, with most of the project removed. Seriously, I think it made sense to me at the time. In this edition, there is a project in its own directory, cards_proj, with no tests. Then each of the chapters have test code (if appropriate) that either work on the one project, or on some local code. Trust me, I think you’ll agree that it’s way easier to follow along now.